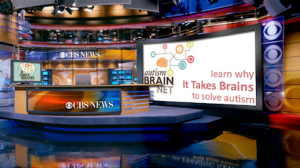 The local and national media have been amazing partners in sharing the importance of Autism BrainNet to a wide audience.

In the first, filmed by CBS Newspath and rebroadcast in over 40 markets nationwide, Carol Koch from Long Island, NY talks about the importance of autism research and the need for brain tissue.

In the second, filmed for NJTV News, Alycia Halladay Ross, CSO of the Autism Science Foundation, and resident of New Jersey, explains why all parents should learn more about the program. In both stories, the Mount Sinai School of Medicine Brain Bank, led by Patrick Hof, is featured. To see the CBS story click here. To see the NJTV news story click here.

|   NEXT
We care about your data, and we'd like to use cookies to give you a smooth browsing experience. Please agree and read more about our privacy policy.AGREE